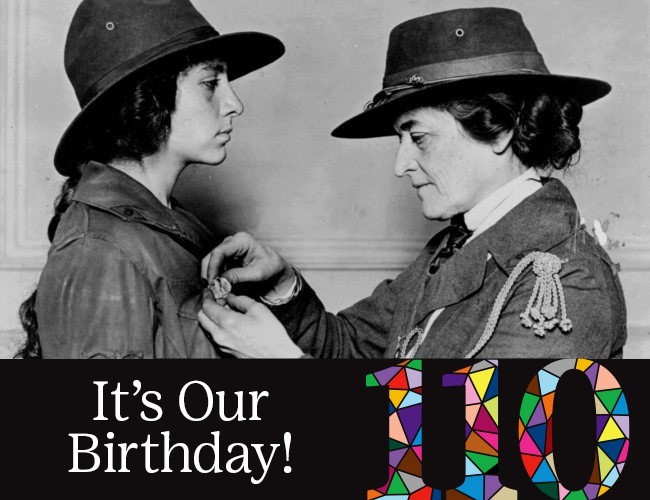 Birthdays are fun, even when you are 52 years old like me, soon to be 53. A celebration of life is good for the soul. I have appreciated celebrating Girl Scout birthdays every time learning something about the struggle and ultimate victory Juliette went through standing up for Girls in a time when it was not commonplace to stand up for women, much less Girls. If you look at pictures of Juliette later in life, it is rare to see one where she is relaxed. Like any good champion, Juliette put the movement on her shoulders and carried it in her heart until her last days. The best news—110 years later, Juliette can smile because her movement is strong, very strong. Our membership numbers this year are fantastic, as we are trending up by 22 percent. Juliette should be smiling—110 years later—her dream is as real as ever. It's exciting to me that our 5,000th member (including Girls and volunteers) this week was a Daisy in north Spokane, part of our Go Getter troops. Our 3,000th Girl Scout to join this year was a Daisy in Ellensburg—yes! Go Daisies—go movement, it is alive just as ‘Daisy’ Gordon Low would have wanted.

I love to reflect on history—it is so rich in learning and lessons. I ponder what Juliette was doing 110 years ago at this time in February, a month before her first meeting—was she planning the 1st troop meeting? Was she figuring out how to grow—who was going to be her second volunteer? Was it her cousin she called to announce the movement was coming? Oh, if only to know...I hope she knew the history she was making. Can you imagine the history made because of the millions of service hours worked to make the world a better place since 1912? What about the thousands of Girl who went on to be trailblazing leaders in politics, in space and in business? And what would the world be without Girl Scout cookies, especially Thin Mints? Not a pretty place...so this 110th birthday, our council is excited to celebrate 110 years of good, no dare I say great history, and we are doing that with 110 Acts of Kindness! From January 1- October 31, 2022 Girls will have the opportunity to submit their Acts of Kindness they have done to receive the 110 Acts of Kindness patch. A huge champion of the Girl Scout movement, I am sad to have missed the 100th year anniversary in 2012 but I am elated that between our Act of Kindness patch earning and the Sweets Before Supper Women of Distinction event, we are celebrating across the Council of Eastern Washington and Northern Idaho that Juliette’s dream is alive and well.

I met a Girl Scout sprout last week whose birthday wish was to become a Daisy. Her mom was bringing her to the store to buy her first uniform so she could hang around with her older Girl Scout Brownie sister. Her smile seeing the store for the first time was from ear to ear. For 110 years, this has been happening and it's a good thing. Watching the Broadway Play Jersey Boys, the final act is so moving. The Jersey Boy narrator mentions that all they have been doing for forty years is chasing the music as the Four Seasons rose to Rock and Roll Hall of Fame legend status. That was their high point. I would say the same thing for Girl Scouts. For 110 years, Juliette and those that follow her have been chasing the dream of serving others. We have been chasing a movement of good. That chase has been epic, and it continues unabated because every day, another Girl joins the chase, excited to learn courage, confidence and character. Yes, we are a movement in harmony saying the Girl Scout promise under a green streetlight, now for 110 years.

Juliette’s most famous quote: “The work of today is the history of tomorrow, and we are its makers.” How right she was, and my goodness, how did she make history! Keep singing Girl Scouts—the world is listening to your hall of fame melody... “On my honor, I will try....”