The Abundance of Girl Scouts 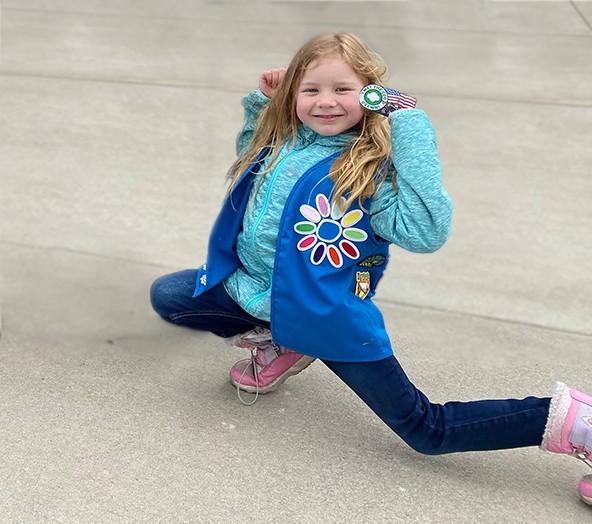 The abundance of Girl Scouts when membership is down nationally 27%???  Why, of course!  Because abundance is a mindset! It is a mindset to always believe the best.  Have you ever seen a Girl Scout in front of the store selling cookies?  Is that not believing the best—clutching a box of Thin Mints, a uniform adorned with patches and a smile with the question “Would you like to buy some cookies?” with the expectation the answer would be “Yes!” That is what Girl Scouts do—they believe in the best!  That is our secret for 109 years.  It all started with Juliette Gordon Low.  Six years before women had the right to vote, a generation before women were serving in government, and when Girls were not allowed to do so many things, Juliette said “Let’s do this”  Let’s Change the world” and she did.  That is where the abundance mindset for us started.  And it continues today.

Attitude is everything…Juliette wanted Girls to try basketball.  Bullied by passersby’s who thought it wrong for Girls to be shooting hoops, she built curtains around the courts to practice in peace.  Girls prepared to survive in the wilderness...not the normal.  Juliette made it the normal and with her experience growing up doing adventuresome activities, she brought that mindset to her first troop.  One of my favorite pictures of Juliette is her tying a knot around a tree for a Girl.  It shows her comfort in the outdoors, it shows that she was a teacher first, and the determination on her face shows that Girls can succeed at anything.  And they can.

While I write this trying to paint a rosy picture for Juliette’s first years because I believe what she was doing, it was not rosy starting out.  But, she persevered. Hobbled by cancer in her final years, Juliette still saw opportunity and disobeyed doctor’s orders to travel to Philadelphia and other places to speak of the potential of promoting Girls to be leaders of courage, confidence and character.  She believed in Girl Scouts even on the very last day on her life.  That is an abundance mindset!  And to put an exclamation mark on it, she gave her precious pearls to help finance the movement and left her carriage house to the movement in her will.  Juliette Gordon Low was buried in her Girl Scout uniform with a note in her pocket stating "You are not only the first Girl Scout, but the best Girl Scout of them all.”  She was the best Girl Scout of all because she believed in abundance, not scarcity, and that strength of will I attest is why Girl Scouts today remains a movement of abundance.  Even in our down times, we still fill the halls of legislators with alumni, we have Girl Scout alumni training to go to the moon, and hundreds of thousands of our alumni are successful businesswoman who succeed every day because they have the mindset “Do you want to buy a box of Samoas?”

I close with a final vignette from a recent article by Suhani Patel, entitled “Abundance Seven steps to move from scarcity to plenty”, published on July 26, 2021, detailing a person who lived a life of abundance despite living in utter scarcity.  Satchel Page was a famous baseball pitcher who fought racism with determination and positivity.  He is famous for the saying, “Work like you don’t need the money, love like you’ve never been hurt, dance like nobody’s watching.” I love this quote at the end of his final game when asked about retirement, he smiled and said, “I never had a job.”  That is an optimist that makes something out of nothing.  While not a Girl Scout, Satchel perfectly epitomize what our movement is.  Despite being down in membership because of COIVD, our movement does not believe our best days are behind us.  Juliette’s vision lives with us that all our Girl Scouts are the best Girl Scouts of them all.  That is why as we distribute donated cookies to fire camps battling raging wildfires, they often turn back the flood of donations, but to Girl Scouts cookies that say, “PLEASE stop on by.”  Abundance is in every box of Thin Mints—that is the secret Girl Scout recipe of why this movement will always grow!