The G.I.R.L. in the Month of the Military Kid 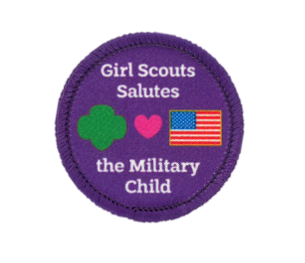 I smiled from ear to ear when months ago our National Girl Scout CEO, Sylvia Acevedo, announced Girl Scouts would take April to uplift the month of the military child. Sylvia talks about her support and honor of military kids in a recent video.

My enthusiasm welled forth knowing that patriotism and civic responsibility that are at the center of Girl Scouts since its founding in 1912.  Our founder Juliette Gordon Low saw in her nascent organization that teaching Girl leadership would contribute to the greater American good.  Indeed, less than five years from our founding, Juliette oriented the organization to support the Homefront during World War I.  Juliette’s sense of service to America became part of Girl Scout’s DNA. Today, that patriotism is exemplified every year when thousands and thousands of cookies are donated by citizens to be given to American servicemembers, a program known as Troop to Troop.  Last year, for example, the citizens of Eastern Washington and Northern Idaho donated over 24,000 boxes to our troops, distributed across our Council and sent overseas.

As a military veteran serving over 20 years and raising two military kids, I recently reflected why Girl Scouts uplifting our military kids seemed such a natural fit.  Suddenly, it hit me—while I raised two sons, the characteristics they learned moving ten times in their young lives mirrors the G.I.R.L. paradigm.  My sons are very independent having to be moving every two years.  They never had the chance to develop roots anywhere.  As a result, they became Go Getters giving all they got as they were plucked down in a variety of environments based on my career.  They lived in seven states, all different school systems.  To thrive in the classroom, they had to innovate to catch up.  My oldest, for example, had to learn cursive in two weeks when he moved mid-year to another state in his elementary years.  He figured out how to learn cursive on his own.  He was an innovator.

Making easy choices as they hopscotched across the country every year was hard.  Both of my military kids had to jump in and take risks trying out for sports teams even though they didn’t know coaches or other players.  Sometimes it worked, sometimes not, but they never would have succeeded if they did not give it a try.  They always tried…they were risk takers.  Finally, both my sons learned to lead through experiential learning facing so many different circumstances and having a multitude of mentors as they grew up.  My oldest was very successful in student council and went on to join the military.  My youngest ran for student body president even though he had only been in the high school a year.  He lost the race by 40 votes but he learned so much in the race which allowed him to succeed in college where he successfully ran to be President of the school’s spirit club.

Bottomline, I have met so many military kids in my career, and to a person, they are go getters, innovators, risk takers and leaders (G.I.R.L.).  They have to be…to adapt to overcome the challenges of the military lifestyle.  I am fond of a famous military quote I will paraphrase…there are no courageous servicemembers without courageous military families.  How true that as the front lines can not be strong if they are looking over their shoulders at the Homefront.  New in command at Fairchild Air Force Base, Washington, back in 2012, it was no surprise to me that the first request I got from an organization on base was from two brave Girl scouts who asked me to reverse the decision to allow cookie selling on base.  Addicted to Thin Mints, of course I said YES and I asked those two courageous Girl Scouts to visit my home to place the order.  They did!  But, that decision impacted other organizations and they too were approved to solicit.  Girl Scouts started it with two Girls of courage.  That is why this month’s honoring of military kids is so natural, such as easy fit for our organization.  Girl Scouts and military kids are cut of the same patriotic cloth.  Both know what G.I.R.L. is.  There are no courageous military families without courageous kids, and, likewise, there are no courageous Girl Scouts without courageous Girls.  We are the home of the free because of the brave, and that bravery starts with our kids, our military kids.  April is their month…thank you Girl Scouts for remembering that!