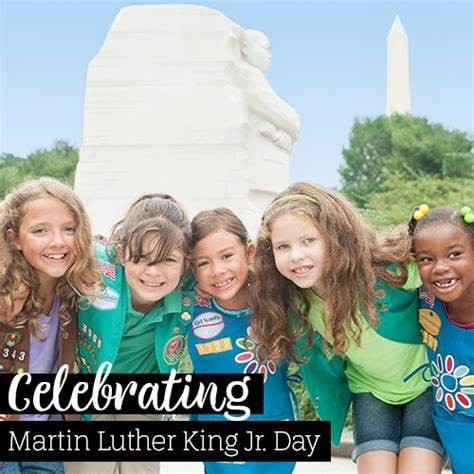 When Martin Luther King Jr. led the 1963 March on Washington for jobs and freedom, he described a "fierce urgency of now.” As we reflect on his legacy this weekend, I echo his words that we are stronger when we march forward together. More than ever, don’t we need a few more Girl Scouts in the mix to help all of us reflect what is most important in life? When Juliette Gordon Low envisioned Girl Scouts in 1912, she saw that society was at an inflection point and that for America to realize its potential, we needed to grow Girl leaders as much as we were supporting boy leaders through the nascent Boy Scout movement. How visionary she was, how compelling her realization that coming together to help other people at all times, both sexes, would get us further.

How right she was! Shortly after the Girl Scouts founding, the 19th Amendment was passed, 100 years ago this year finally giving women the right to vote. Once it passed, Girl Scouts became integral in helping the initiative realize its trailblazing potential. For example, when the polls finally opened to women, continued resistance to their right to vote persisted with restrictions in place to prevent women from voting if they brought their kids to the voting booths. If you have a crisis, find a Girl Scout and that is exactly what happened with Girl Scouts stepping up to babysit so women could vote. This is but one of many ways that Girl Scouts early on became integral to uplifting civic discourse of our new country.

This noble effort to better Abraham Lincoln’s vision of us being a country “of the people, by the people and for the people” all came together during the dark days of the Depression and fearful days of World War II when it took brave men AND women to achieve unconditional victory. I was heartened this week to see Mae Krier, one of the original Rosie the Riveters, in Washington DC, articulating why the Rosies should get the Congressional Gold Medal . Indeed, they should because without the incredible strength of the women labor force in World War II, our front lines would have crumbled. In a recent article on the subject, what Krier said she remembers most is that she and other young women proved they were capable of filling roles no one thought they could.

The one constant between yesteryear and today and Girl Scouts is we are integral to bringing our community together. Whether babysitting 100 years ago, planting victory gardens in WWII, or accomplishing a plethora of bronze, silver and gold “take action” projects today, Girl Scouts are at the forefront of building community in ways that keeps Juliette smiling. She started it and it is upon our alter to finish it, all 50 million alumni strong.  We remember Dr Martin Luther King this weekend for his call to service, his enshrinement of civil rights and equality. 100 years ago, Girl Scouts were integral to realizing the dream of voting equality. Today, we are integral to realizing stronger communities filled with Girls of courage, confidence and character who will make the world a better place. While the dark days of World War II are behind us, the socioeconomic and civic affairs challenges loom in much of our communities. I do see a “fierce urgency of now” still needed to take action to help others. Have a crisis…well call a Girl Scout…the time is now and we are ready to serve! What a movement of service we are part of that walks on the same path that Juliette and Dr King marched on!