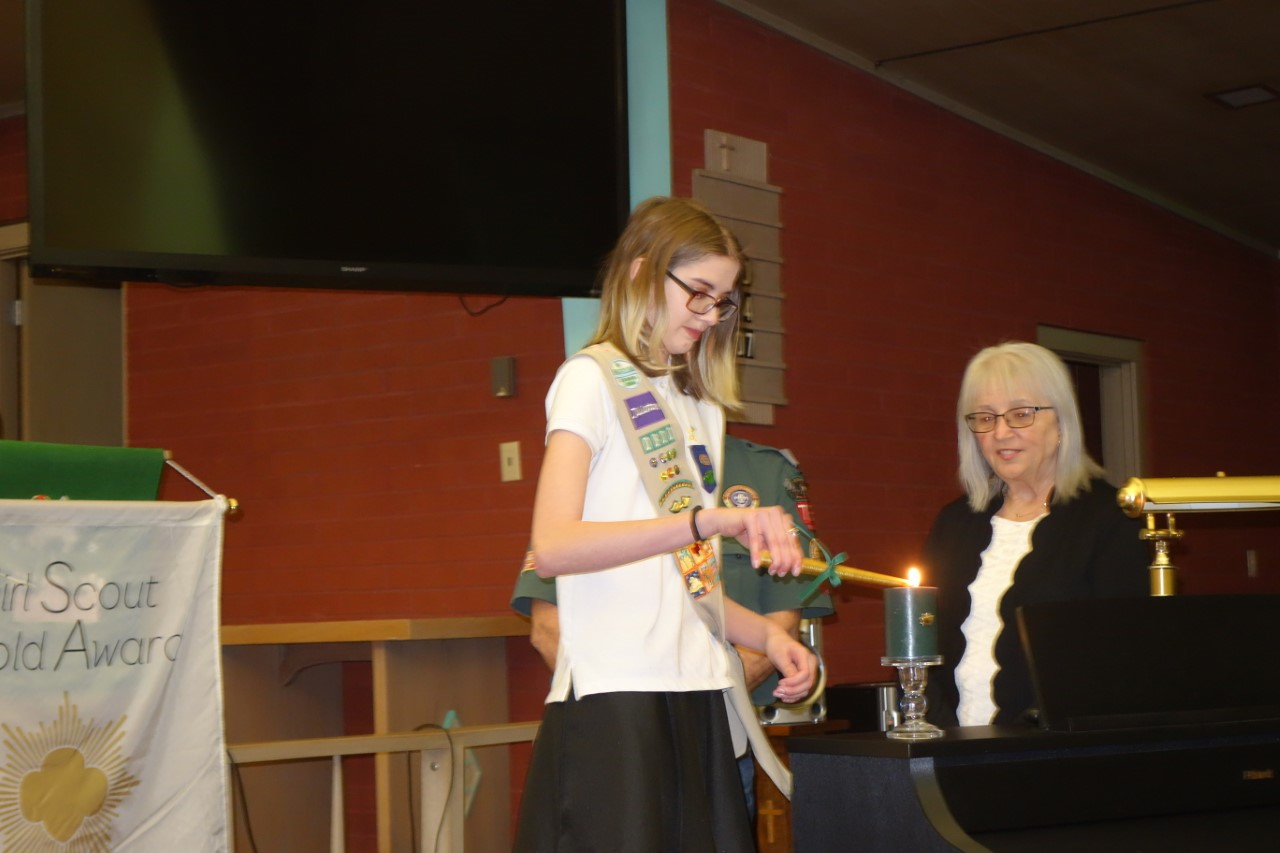 This last weekend, our Council was able to celebrate the Gold Award for our seventh recipient since last summer, Marlee McKeehen, of Davenport.  After 82 hours of individual effort, joined by countless hours made by other supporters, a food bank known as Care and Share was renovated, and made more welcoming for local residents.  It was no surprise to me that Marlee led the ceremony and focused the night on all those that helped her-- including a Venture troop and a local hardware store--profusely thanking them.  She is an inspiring leader.  No surprise, she is a Gold Award Girl Scout.

As I listened to her eloquently speak at a church on a cold and snowy February night, I could not help and think of the first thing young Girl Scouts put to heart...the Girl Scout promise.  The heart of the promise are these simple words:  "To help people at all times."  In her final Girl Scout project as she prepares to head off to college, she chose the one initiative in her small town with the biggest impact--providing for food sufficiency.  As I reflected back on the other six Gold Award projects in our Council in 2018, it was clear to me that what binds the Gold Award to every Girl Scout is the fact a Gold Award Girl Scout is the epitome of a promise realized.

Our iconic organization is deep in reverence for others.  Realizing the revitalizing power of service, Juliette Gordan Lowe quickly made a key tenet of her program to help others as World War I stressed our country in 1917.  Today that tradition continues with the three Highest Awards, Bronze, Silver and Gold, all defined by service. and Gold being the ultimate difference maker in changing the world.  A faith in our program also connects every Girl Scout...faith in the Girl Scout program, faith in each other, and faith in society to support Girl Scouts. Marlee was a Juliette Girl Scout, a lone Girl Scout, yet she achieved our highest award because she believed  in her grandparents, faith in her peers who agreed to help and a belief in her community.  Had I met her three years ago as she rejoined Girl Scouts, I am sure she would not have been sure how her Girl Scout journey would conclude, but she believed in her journey, and so step by step, she made it to discovering sustainable solution to a community challenge.  Dr Martin Luther King famously said:  "Faith is taking the first step without seeing the whole staircase."  Marlee took that first step and it was ultimately because she made a commitment long ago putting up three fingers and promising to help people at all times.

As our winter Daisy recruiting season kicks off, more and more Girls will put up their hand and say the Girl Scout promise.  In doing so, they too will be taking the first step on their Golden journey should they accept to continue to climb the "service mountain."  I finished praising Marlee's dedication last week by reminding her that the Gold journey never ends. Down the road, she will buy a Thin Mint at a booth. I know to the core she will reach out, shake a Daisy's hand and share she is a Gold Award Girl Scout. In that one moment, the torch will pass and that Daisy will realize she too wants to become a Gold Award Girl Scout.  The one common denominator between the two is the Girl Scout promise and the pledge to help other people at all times. Thank you Marlee for reminding me that the Girl Scout promise is iconic too just like our brand. Go Gold!