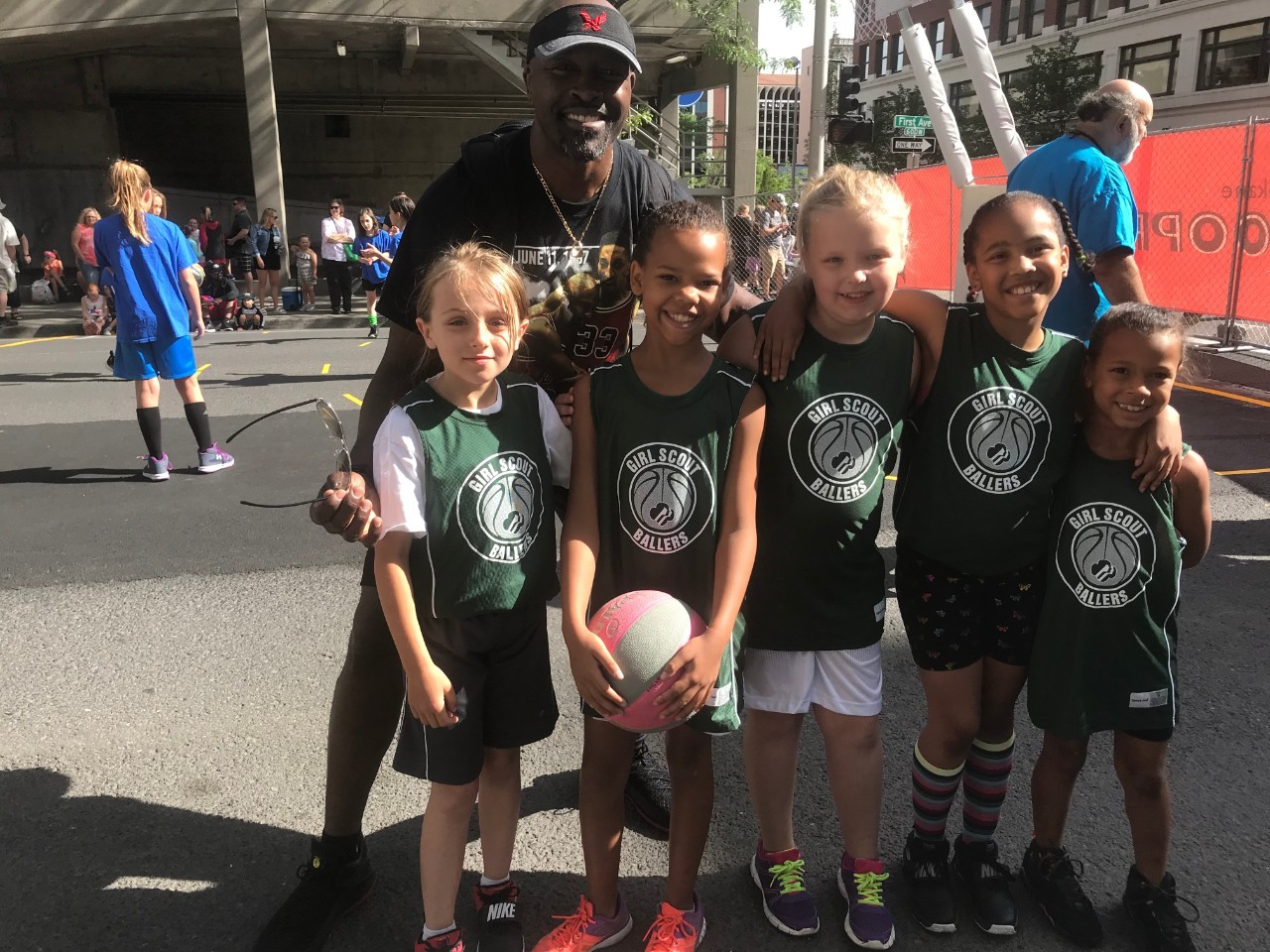 The last two weeks, I have thoroughly enjoyed visiting back to back weekend events with Girl Scouts leading the charge: a Coeur d'Alene Service Unit camporee at Camp Stidwell and Spokane's famous basketball tournament, Hoopfest. Two disparate events but one thing in common: Girl Scout teamwork. I loved the Camporee theme...'Survivor.' It was ingenious--seven or so Survivor Tribes learning outdoor skills. Unlike the real Survivor TV show where contestant work with their team to win challenges, ultimately the contestants are trying to outwit and outlast their teammates. In "Girl Scout Survivor," the older Girl Scouts were helping the young Girl Scouts to learn and grow. Teamwork was the start of the day and the end of the day. In the firebuilding session, for example, it was special to see the Girls wok together to learn how to start a camp fire. I was most impressed when one team had troubles to get the kindling to light on fire, the other teams came over to help. In moments, the camp fire was ablaze. It was a natural evoluntion of the teambuilding slowly evolving that day. That culminated in the day's final event, a group Campfire, where each Survivor Tribe gave a skit or cheer. In each case, the Senior and Ambassador Scouts led the skit but the funny actions of each group were humourous when Juniors, Brownies and Daisies were part of the scene. It was a day of growth, a day when outlasting turned to Service Unit building. No one was voted off the island. Rather, the island grew closer together with every collective chant in the setting sun over the growing campfire.

This weekend had the same theme. I am sure many Girl Scouts were competing in the thousands and thousands of players in Spokane's Hoopfest, the world's largest 3 on 3 tournament. In particular, we sponsored two teams as a Council and they played their hearts out. One team even played up in an age division making the challenge even steeper. Even though both group's were young and new to basketball, not once did individual play dominate. The Girls passed to each, set screens to each other and always looked to hand off the ball. Our generous Coach Tommy Williams kept the rotations going so all Girls could play. We did not win the tournament but each Girl grew in courage, confidence and character. That is a win for our Council and I salute our Program team for sponsoring both teams. It was special to see one team score five baskets in 20 minutes in their last game, the best teamwork yet. "Teamwork makes the dreamwork" and the Girl Scouts never wavered in that goal in each of the six games.

Our mission of helping Girls succeed continues on the right "island" and the right basketball court because our compass is true and our staff, volunteers and Girl Scouts are team players!